Having been in existence for eight years, we have extensive knowledge in the field of borehole drilling and understand requirements of specific customers as well as projects. The company has been involved in a number of projects involving evaluation, baseline studies, feasibility studies, environmental impact assessment, project design and proposal development, community need assessment etc. Currently the company employs five drillers and two technical assistants on each rig with over ten years combined experience in drilling and maintenance of the machines. The Company has a total of 17 employees, who form part of the drilling crew in their respective units. For pump and recovery tests, the company has 12 pumps for use on site, including the necessary equipment to lower and lift submersible pumps.
Our Services
Geological Survey
After the contract has been formalized, our technical team will visit the site along with geologists to identify the best place to carry out the drilling process.
Mobilization
The drilling rig accompanied by a support truck will reach the site. Based on the soil and rock formation conditions, we would take approximately 3 hours to prepare for the drilling process.
Borehole Drilling
The drilling is carried out by using the “Down-The-Hole” technology. This system works by using high compressed air built within our drilling rig. The size of the hole can vary depending on the requirement of the client. As the drilling process continuous, geological rock samples are taken at 2 meter intervals. Struck and water rest levels are constantly recorded. This process enables us to estimate the yield of individual aquifers encountered.
Well Casing
Once the borehole has been drilled, it must be lined with either steel or UPVC casing. The casing process keeps the well open and protects the earth, similar to the efforts to protect groundwater. The hard metal casing shores up the wellbore and extends through both the verticality and the horizontal drilling phases, assuring the long-term integrity of the well from end-to-end. In addition to providing stabilization and keeping the sides of the well from caving in on themselves, casing protects the well stream.

Well Development
Once the screen, pack, seals and backfill have been installed, the well is developed. This development aims at repairing the damage done to the aquifer during the course of drilling by removing clays and other additives from the borehole. This also alters the physical characteristics of aquifer around the screen and removes fine particles. The use of over pumping as a means of development is not advocated since it only increases permeability in zones which are already permeable. Instead, we recommend mechanical surging with a plunger or the use of air or water jetting which physically agitates the gravel pack and adjacent aquifer material. This is an extremely efficient method of developing and cleaning wells.

Well Testing
After development and preliminary tests, a long-duration well test is carried out. Well tests have to be carried out on all newly-completed wells, because not only does this give an indication of the success of the drilling, design and development, but it also yields formation on aquifer parameters which are vital to the hydro geologist.

A well test consists of pumping a well from a measured static water level (SWL) at a known or measured yield, and recording the rate and pattern by which the water level within the well changes. Once a dynamic water level (DWL) is reached, rate of inflow to the well equals the rate of pumping. Today, it is a common practice to carry out a ‘step drawdown test’, in which the yield is increased stepwise. Each step is continued until hydraulic equilibrium is reached after which the yield is increased with 50 to 100%.Towards the end of the test a water sample of 2 liters is collected for chemical analysis. The duration of the test is 24 hours, with a further 8 hours for a recovery test (during which the rate of recovery to SWL I recorded). The results of the test enables the hydro geologist to calculate the best pumping rate, the installation depth, and the drawdown for a given discharge rate. 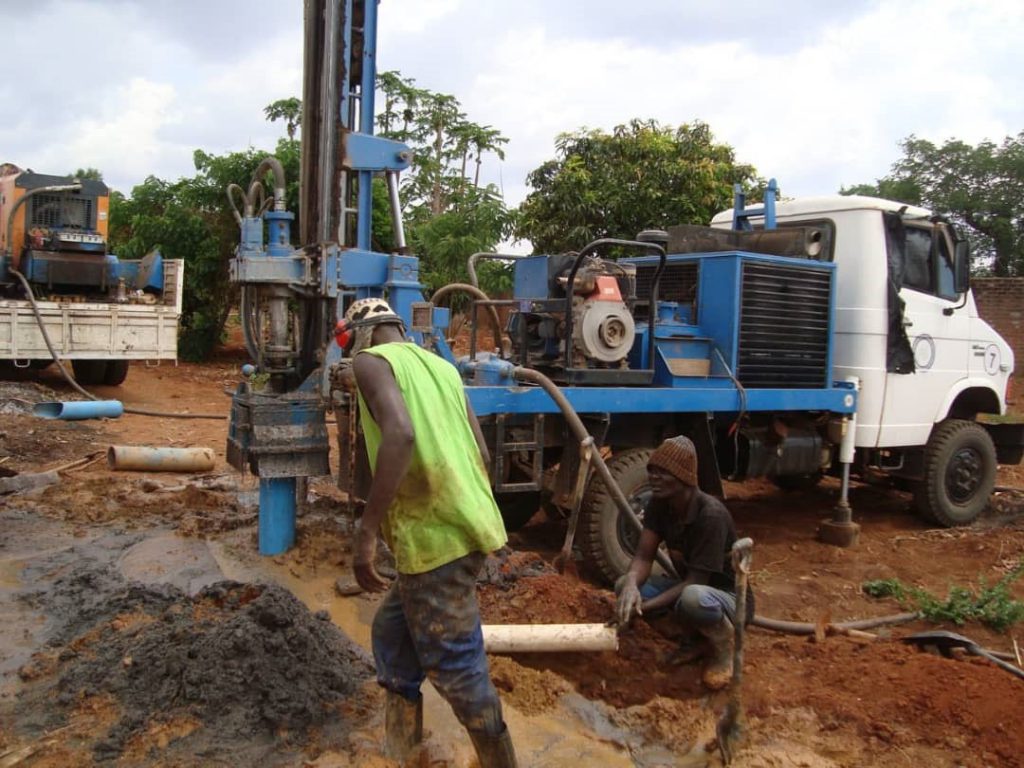